Boxstarter can detect which packages have changed and test their installations on one or more deployment targets. Boxstarter can automate publishing successful packages to their feed.

The TestRunner module can be downloaded and installed via Chocolatey by running: 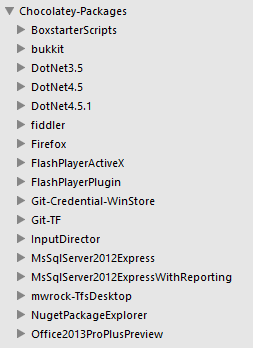 This location can be changed using the Set-BoxstarterConfig command.

Boxstarter tests Chocolatey packages by deploying and installing the package to one or more deployment targets. The deployment options include settings that control what computers to use to test the packages, the credentials to use, VM checkpoints to restore as well as NuGet feed and API key for publishing successful packages.

This configures package deployments for Azure VMs testVM1 and testVM2 hosted in the ServiceName cloud service using the Admin credential. Prior to testing a package install, the VM will be restored to the clean checkpoint. If packages are published using Publish-BoxstarterPackage and are not associated with a NuGet feed, they will publish to the mywackyfeed on myget.org using API Key 5cbc38d9-1a94-430d-8361-685a9080a6b8.

The default deployment options deploy locally using the credentials of the current user and publish to the public Chocolatey community feed.

Individual packages in a Boxstarter repository can be published to different feeds. The NuGet feed and API Key configured using Set-BoxstarterDeploymentOptions are default settings used if a package has not been individually assigned to its own feed.

To assign a package to an individual feed, use Set-BoxstarterPackageNugetFeed.

When using multiple feeds, if one needs to use the Publish-BoxstarterPackage command to publish the package to its feed, an API key for each feed must be set. This can be accomplished by using the Set-BoxstarterFeedAPIKey.

Test-BoxstarterPackage can be called with an array of packages.

Boxstarter will build their .nupkg files and attempt to install them on the deployment targets specified with Set-BoxstarterDeploymentOptions. Boxstarter will use the credentials provided in the deployment options. You can provide several targets to Set-BoxstarterDeploymentOptions. One may wish to supply different machines running different versions of windows. If a package install runs to completion with no exceptions or returned error codes, Boxstarter considers the install a PASSED test. If Test-BoxstarterPackage is called with no packages specified, Boxstarter will iterate over each package in its local repository. It will build the nupkg and compare its version to the version on the package published feed. If the version in the repo is greater than the published version, Boxstarter will initiate a test on the deployment targets otherwise the package test will be skipped. 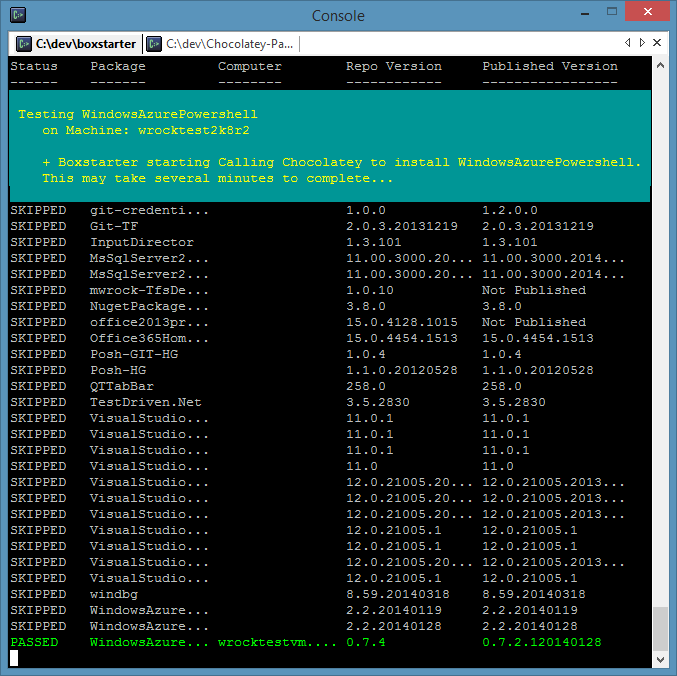 If the Azure Boxstarter module is used as a VM provider and any of the Azure VMs are not running when the tests begin, Boxstarter will shut down each VM that was not initially running once the testing is completed.

Including Testing and Publishing in Continuous Integration

The TestRunner module includes an Install-BoxstarterScripts command that embeds a MSBuild file, a bootstrapper and a PowerShell script into a repository that can run the tests and publish successful packages.

There are two primary usage patterns for running tests from a build server:

Here, tests are run in a build environment on a server that is under your direct ownership and full control. The key differentiator here is that you can set your deployment options on this machine and be confident that they will remain on every build from build to build.

This is often a build server that you do not own or control outside of your individual builds. If you set your deployment options on the server, they may likely be gone on your next build. The Visual Studio Online build services would land in this category.

If you administer your own build server, there is some one time setup that you need to perform to integrate Boxstarter TestRunner tests and automatic package publishing. This must be performed on the build machine that will run the builds (a remote PowerShell session is acceptable). In many build systems, this may be a different machine from the central server, in TFS it would be the build "controller" or in TeamCity the build "agent." Also, these steps must be performed using the credentials of the SAME USER ACCOUNT that your build server runs under.

If your build server environment is shared and may be built from scratch on every build then you cannot preinstall the TestRunner and configure necessary settings up front. Instead the runner must be installed during the build process and the settings passed via MSBuild parameters. When you run Install-BoxstarterScripts on your Chocolatey repository, a bootstrapper is added to your repo that can take care of installing the Test Runner and its dependencies. Additionally, you can pass the following MSBuild parameters to the BoxstarterBuild.proj script: